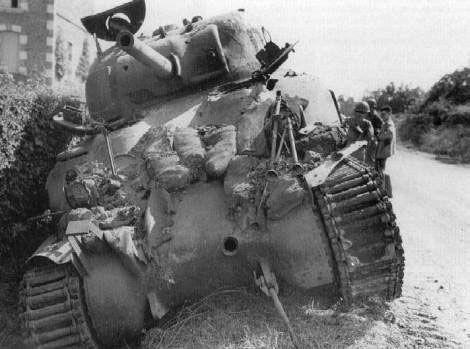 M4A1 Knocked Out Through Frontal Hull Armor in Italy

The M4 Medium tank, better known today as the Sherman tank, was a great tank that, at the time of its introduction, was one of the best tanks in the world in regard to its armor, armament, speed, reliability, and ease of production.  Improved versions of the tank saw service with mutliple countries and were still in service with the United States military by 1953 in Korea.  Few other tanks from WWII, aside from perhaps the T-34/85 of Soviet origin, have survived the insane evolution of armored warfare from that conflict and thus have seen such an extensive career.

Notice in the picture above that the tank has been knocked out by an AP round right through the sloped frontal armor on the hull (known as a glacis plate).   The frontal armor of a tank, whether on the hull or the turret, is usually the thickest armor on the tank.  For obvious reasons, tanks are much more likely to engage other tanks with their strongest armor facing the enemy, and so in truth a well made anti-tank gun should work towards being able to attack an enemy through it's frontal armor.  Despite popular myth, the M4 Sherman actually had fairly substantial frontal armor when compared to the medium tanks of other WWII nations, and it was sloped, making shots more likely to ricochet while also making the effective thickness of the armor higher based on the degree of slope. As the picture clearly shows however, the Germans were pretty good at making anti-tank guns that could easily defeat the Sherman's frontal armor.

At the time it was first put into action, its short 75mm main gun was one of the more powerful tank guns available.  However, as good as the tank was after its introduction at the Battle of El Alamein in late 1942, by early 1944 it was woefully outgunned by modern German armor, and much of the failure for upgunning the M4 in time can be placed at the feet of Lieutenant General Lesley J. McNair, commander of Army Ground Forces in WWII.

The need for more powerful anti-tank cannons was obviously on the mind of those at the Ordnance Department however, shown by their testing of a long barrelled high velocity 76mm cannon for the M4 as early as August 1942, before the first production Shermans had even arrived for the British to use in Egypt.  In the end the long 76mm was turned down in 1942 because it was bigger and made the crew compartment inisde the turret more cramped, which is interesting when one considers that the British upgunned their Shermans with even larger cannons (Ordnance QF 17 pounder, the Shermans mounted with them were called Sherman Fireflies), suffered from even more cramped space, yet made the very logical realization that having a crew in a cramped compartment is better than having them die needlessly in a one-sided tank duel because they were ill-equipped to fight by the country that is known for winning the war by outproducing everyone else.   Instead, a more capable and upgunned 76mm Sherman would not be successfully tested again for another year, and it took almost a year further for it to be accepted for combat.  The M4 Sherman with a 76mm gun, which still found itself wanting in penetration power against late war German heavy armor, was not approved for combat until July of 1944, much too late to be of much use in Operation Overlord.  U.S. Army General Jacob Devers was conversely instrumental in attempting to upgun the M4  from its wimpy 75mm to a high velocity 76mm gun and in general making sure that US tanks could effectively fight other tanks.  Here is an excerpt from a professional military assessment of Devers by Mathew J. Brown:

“For example, dialogue between manufacturers and the Army eventually changed the 75mm gun of the Sherman to a 76.2mm gun, giving it more penetrating power as a tank destroyer. As Chief of the Armored Force, General Devers always felt that the best tank destroyer is a better tank. His leadership competency of leveraging technology to obtain a military advantage and conceptual thinking of knowing what would be important in the future gave the U.S. Armored Forces overwhelming combat power in World War II.”